skip to main | skip to sidebar

Advice to the Young at Heart*

* Total props to whomever can figure out where this is from. No cheating! 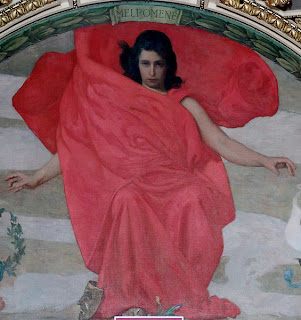 People, I can't tell you how many posts I have started and then stopped this week (well, ok, it was three, but who's counting?). I have lots to say, the written diarrhea is backing up, but I can't quite find the right words to express it. I have lots of ideas written down - but none seem inspiring. Where is my muse? Does infertility even have a muse? If it did, I would imagine that it would be Melpomene, she of tragedy. Thalia could be the pinch hitter if good ole Mel was hitting the town one night, desperate for a little levity after the woes of the infertile world.

Ah, yes, I think I will indulge in a little navel gazing, but instead of addressing acne-ridden teenagers who are aching to go get trashed before the ink on their diplomas dries, I will speak directly to the me that ten years ago this year graduated from college. Lord knows I could have used some words of wisdom. Here goes:

You have now been out of college for a month and frankly, you're a bit of a mess. No forward momentum to propel you to the next adventure, no plan for the future. Knowing what I know now, here's some advice for getting through then.

Seek engagement (no, not a marriage proposal). I know how much you loved college - the friends, the sense of being and fitting in that you never achieved in high school, and I know how hard it is for you to say goodbye to those things. I don't think it would be possible to recreate the experience that you had in college (and in some respects, you probably don't want to), but remember how wonderful it felt to be engaged, learning, constantly introduced to new ideas and new people. You now have to seek those things out for they will not come as easily.

Lighten Up. I do remember very well how much you thought of yourself and how seriously you took things. I'll just say two words: lighten up. Nothing you experienced in your 22 years in any way compares to the shit storm you will run into later in life. Failure to start lightening up will result in a nasty five-year hangover down the road.

Be compassionate. Remember that no one's life is a bed of roses and nine times out of ten, the person who is making your life difficult has a lot of difficulty themselves. The one out of ten person is probably just an asshole and not worthy of further thought.

Be gracious. You know the Golden Rule, but it bears repeating. Treat others as you would have them treat you - even if they don't hold up their end of the bargain! Not only do you get to ride the moral high ground, you have done a good deed that has lightened someone else's burden.

And, most importantly, be mindful. You have your whole life in front of you. Now is not the time to rush it.

Smooches, Your Older, Wiser Self.

ps - those birth control pills that you were taking for endometriosis? Totally not needed. Throw those bad boys out (but still use a condom!). Use the money you would have spent to buy stock in Apple. You could pay for numerous IF treatments off of the earnings. Just a thought.

What would you, dear reader, tell your younger self?
Posted by Mrs.X at 5:13 PM

Labels: not much of anything, philosophizing

The blog title is a song, although I can't remember by whom.

I would tell myself to start TTC a little sooner and to put myself into it completely instead of dawdling for two years. Regular periods and a family history of fertility into late thirties is no guarantee of anything.

You are VERY wise now. Especially in the P.S.!

I've got Rod Stewart's "Young Turks" in my head now, but I'm pretty sure that's not right.

Hmm... First of all I would tell myself NOT to go to graduate school for psychology and find a passion instead. That would save countless years in a job I so dislike.

I would tell myself to stay away from the bad boys, the losers, etc. You don't have to fix a guy. There are good ones out there.

I would tell myself to stop wasting 40 bucks a month on the NuvaRing...

Yep, what Pepper said. Or at least start looking for help sooner than we did. That well-meaning family dr who told you "don't worry, it will happen?" Don't take his word for it.

"Listen to your mother. She's much wiser than you imagine & she really does want what's best for you.

Clean up that pigsty of an apartment you're living in. That alone will make you feel better.

Stop spending money like it's going out of style. You could actually buy a decent car if you'd lay off the Waffle House & CD's.

Those people aren't really your friends. If they were, they'd put forth an effort instead of leaving it all up to you."

But then again, if I hadn't been such a dolt then, I'd never be where I am now. Litterally.

I can identify so much with what you wrote to 22-year-old you. I spent, I think, the first 8 months out of undergrad just reeling from the loss of what felt like the first real home I ever had.

I think I'd tell my younger self to, for god's sake, find a way to stop gaining weight NOW, instead of waiting until it got truly out of hand. And to step away from the Phen-Pro, which screwed up my metabolism six ways to Sunday.

What would i have told myself? Nothing really.
I started ttc the month we were married.
I think I would have told my teenage self not to worry, that I was right, in the end, nothing that happens as a teenager really matters.

"Soon we will be older... when we gonna make it work?" [cue sweeping strings, if we're talking Tears for Fears].

I think I'd tell my younger self that drama will come of its own accord; no need to court it. And that sometimes it's better to be alone: just get some hobbies, routines, structure to fill the gap. Also, that real men are better than scrawny intellectuals who proclaim they don't need to be manly. Not that intellectuals can't be real men, but so few try.

And we have a winner!!! Shinejil takes it. Good work, my dear. Tears for Fears it is off of their Seeds of Love album. Excellent listen, by the way.

I'd tell myself almost the same stuff you did-especially to forgo the BCP and invest in Apple! I'd mention that perhaps starting sooner than later would be a fine idea also.

I'd tell my 10 year ago self to have as much fun with Patty as possible over the next year - before the cancer arrives. I'd also tell myself that I will have more strength than I would think possible and when the days are dark to remember I am strong. I'd also tell myself to be patient and wait for the right man to come along - well I did wait, I just wasn't patient.

Love this post. Here's my advice to my younger self:

Leave town now! Get enrolled in the acting school of your dreams and get of your shitty, shitty town.

That's pretty much it. I will have saved you at least 10 years of misery.

Get the hell off the couch & stop wallowing in self-pity! Also, lay off the beer.

The man you are with is THE ONE. No need for doubt.

You will eventually love where you are living. Don't be sad you are there.

Your cat will still be with you for many years to come.

Don't ever use Depo-provera. You do not need to gain 25 lbs in one month, only to still carry it 8 years later.

What's interesting, though, is that when I flash back to all the horrible mistakes, twists and turns over those years -- even the really bad stuff -- it's still led me to exactly where I am today. Which, aside from my infertility, is pretty great.

"What we anticipate seldom occurs; what we least expected generally happens." - Benjamin Disraeli

E-Mail Me! I May Even Respond!

If reading my blog isn't enough to convince you that I'm certifiable, you can e-mail me at madamex888@yahoo.com.

Or, you can read my other blog, A Year of Inconceivable Living, in which I attempt to step away from the infertility treatment buffet.

Mrs.X
Where Kitties Rule the Roost, United States
I am 33-year-old dame of many talents and interests. I am married to Mr. X, and despite my mysterious allure, live a fairly uninteresting life in the suburbs. I'm a professional working from home (and no, I do not work in my jammies). We have two kitties (aka Fluffy and the Bad One) of whom we take too many pictures. We are in the process of adopting a Golden Retriever. I'm an only child and I share abominally. I'm an Atheist and have been since I was very young. I do crossword puzzles in pen. I love color and my entire closet is organized like the rainbow. I love words, including knickers, zaftig, snorgle, peevish, and eccumenical. I love to read in the bath. I want to take up piano again. As for kids, well, I've been trying to get pregnant since May 2005 with medical intervention since August 2006. We've had two pregnancies and two miscarriages. As of now, I'm enjoying boozing, exercising, general loose living and all other previously verboten habits.

The Journey So Far...

For the narrative version of the sordid story going back to the beginning click here and here.

Dr. Uterus: our RE and the man who would knock me up
Dr. Freak Out: the opinionated and outspoken embryologist
Nurse To A T: Dr. Uterus's nurse
Sweetie, Mr. X, the Man: my hubby, love, one and only

What Does It All Mean? A Guide to Abbreviations